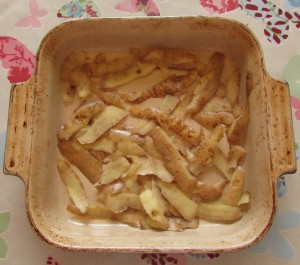 The problem with living on a budget is that you become obsessed with food waste. This is a good thing really, but does make me sad when I have to throw something perfectly edible away. Now that we’ve gone local and organic with our veg, I’ve already stopped peeling my carrots and potatoes in favour of scrubbing. But when I’m making mash I still peel as my daughter won’t eat mash with lumps in. It’s been breaking my heart throwing away these edible potato skins especially as most of the nutrients in vegetables lie just below the surface. We’ve been missing crisps this month, so I thought I’d attempt a home-made healthy version using the left over potato skins tossed in olive oil and sea salt and roasted in a hot oven for 10-15 minutes (or until crispy).

You can eat these on their own but there’s nothing better than a spicy dipping sauce. If you use tinned tomatoes it’s really cheap too. Here’s the recipe –

Drain off the juice from one tin of tomatoes and then chop the tomatoes roughly. Finely chop 1 onion, 1 clove of garlic and 1 small red chilli. Place the tomatoes, onions, garlic, 100g of castor sugar, 2 tbsp of cider vinegar and 1 tsp salt in a saucepan and bring to the boil. Reduce to a medium heat and gently simmer for 15-20 mins until it’s a sticky chutney. Spoon into a sterilized jar and seal. Or if you’re like us – serve immediately with warm potato skin crisps. A yummy Saturday afternoon snack!

I’m struggling to put a cost on potato skins as they would’ve usually ended up in the food waste. But I would imagine this recipe costs less than 50p to make. And if you’ve got squashy tomatoes at the back of the fridge that need using up – even better!